One man’s search for his Filipino mother!

Home > Asia  > One man’s search for his Filipino mother! One man’s search for his Filipino mother!

Click here to listen to the podcast on Apple

Click here to listen to the podcast on Spotify

Matthieu Heimel’s incredibly touching story is about his birth-mother Nenita Evans, a Filipino woman, who went missing after her last sighting in Melbourne, Australia, back in 1987.

This is a story that Matthieu would like to share with the Filipino and wider communities in Australia and abroad.

Matthieu Heimel was born in the Olongapo City General Hospital, Olangapo City, Philippines in June 1979 and placed in an orphanage by his birth-mother who was unable to look after him.

Matthieu was adopted at the age of three from the orphanage in the Philippines by a French family and raised in the South West of France, near Toulouse.

Image Source: Michel Therrat ‘My French Family in the South West of France’.

In his adult years, his passion and talent led him to Barcelona, Spain where he played semi-professional Rugby Union and it was there that he met Australians from Perth who encouraged him to visit the country for a lifestyle change.

Matthieu took up the challenge and travelled to Perth, studied to become a French Teacher and whilst he was at University, he met his future wife, got married and had two children.

The chance discovery of a DNA matching profile service in December 2018 led him on a search around the world for the identity of his birth father and birth mother. 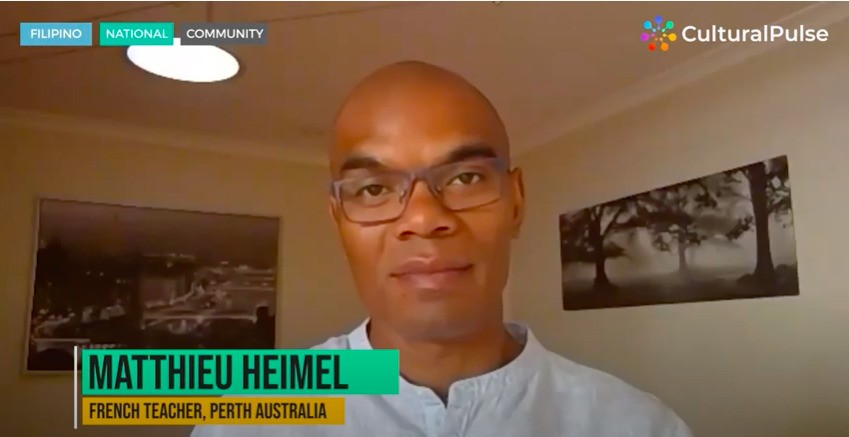 To his surprise, his search for his birth-father led him to an African-American man in Mississippi, USA who was stationed on the US military base at that time in the Philippines.

He travelled to the US to reunite with his birth-father and his brother and connected with them. Re-uniting with the family was a joyous connection.

Matthieu, eager to discover the identity of his birth-mother found that she was Filipino by ancestry.

“Her maiden name was Nenita Partoza Padullon, also known as Anita or Annie. She is from Salcedo, Guiuan Eastern Samar in the Philippines.”

The young, Nenita Partoza Padullon, met the charming American, fell pregnant and gave birth to a baby boy whom she later placed in an orphanage.

She continued to support herself and her family in Manila and in 1981, met an Australian man named Greg Evans whom she married and together they migrated to Melbourne, Australia in 1985.

After marriage she was also known as Nenita Evans.

Once she and Greg arrived in Australia, Nenita secured work as a house attendant in charge of the floral arrangements at the prestigious Gentlemen’s Club, a private social club established in 1838, called the ‘Melbourne Club’.

Nenita finally left the Melbourne Club. She successfully completed a course on flower arrangements and in 1987 she was looking forward to a job interview and a fresh start to the new year.

On 8 January 1987, she visited her old workplace, the ‘Melbourne Club’, to say farewell to the colleagues she had worked with.

On that fateful afternoon, Nenita Evans, went missing and her body was never found.

“I am hoping that she is still alive and I am trying to find closure to her story, not only for myself but also for our relatives in the Philippines.

“My theory is that she may have changed her identity due to unknown circumstances and restarted a new life in another state in Australia. It was apparently easier to vanish in Australia in the 80’s. My simple request is that I ask that you watch the SBS documentary and perhaps, we never know, maybe someone will recognise her face even if she changed her name.”

Matthieu reached out to Greg Evans, the Australian husband of Nenita, on the one bond they share – their much loved ‘Nenita’.

In an emotional moment in the SBS Documentary, a beautifully knitted red blanket was gifted by Nenita to her mother-in-law (Greg Evan’s mother) whom she had a close relationship with.

After the passing of her mother-in-law, and in a touching tribute, Greg insisted that the ‘red blanket’ from Nenita should be passed to her son Matthieu. A Coronial Inquest into the case concluded that based on the evidence at that time, ‘Nenita’ had been a victim of foul play.

Disheartened to find the case classified as a ‘cold case’, with no evidence of a body or a conviction, Matthieu was determined to reach out to the Filipino community in Australia to help him.

“I would highly recommend that everyone watch the SBS documentary broadcast back in September 2020 on the TV Show ‘Every Family has a Secret’.” Matthieu adds.

During Matthieu’s initial search for his birth mother Nenita, he came across an article by Kathleen Maltzahn including the name of Nenita Evans. She introduced Matthieu to Filipino Community Leader, Melba Marginson, in 2019.

Melba is based in Melbourne and Founder and Chairperson of a family violence advocacy group, The Silent Witness Network Inc.

She is also the Chair of the Centre for Philippine Concerns Australia, achieving widespread public awareness on the high level of family violence involving Filipino women in Australia in the 1980s.

Melba Marginson was brave enough to lead the national campaign on the issue which involved the murders and disappearances of Filipino women from 1980 onwards and sheds a fascinating insight into what it was like for Filipino women like Nenita in the 1980’s.

“It was the Filipino community that raised the alarm on family violence in Australia.”

It’s Melba’s wish that everyone in the Filipino community assist Matthieu where they can.

“It’s important that Matthieu’s story gets out to the Filipino community and is shared by family and friends not just here in Australia, but also back in the Philippines. If you recognise her face or recall seeing ‘Nenita’, ‘Anita’ or ‘Annie’ it’s important you reach out to us.” she adds. Support Matthieu Heimel in the search for his mother.

Step 1: Watch the full version of the CulturalPulse video ‘One man’s search for his Filipino mother’ above:

Step 2: Click here to watch the SBS documentary broadcast in September 2020 on the TV show Every Family Has A Secret

Step 3: Click here to read the article in the newspaper The Age ‘The Melbourne Club Murderers’ written by Mr John Silvester